Manchester United vs Arsenal – The Battles of Old Trafford

Currently, two of the most prominent rivals of Manchester United are Manchester City and Liverpool, partly due to their proximity, and their more recent positions among the top four teams in the Premier League. Matches between any of these teams usually raises high expectations among fans during the season.

However, a decade or two ago, precisely around 1990, Liverpool and Man. City were not the main threat to Alex Ferguson’s powerful team. The main opposition to Ferguson’s title hopes came from Arsenal. That is why some of the most explosive matches that have ever being played at Old Trafford have been between United and the Gunners.

Arsenal vs Manchester United tickets are almost always in high demand by fans of the Premier League and they may be obtained from renowned websites like Ticketbis.

Long before the notorious match between these two teams in 2002 which was tagged “the Battle of Old Trafford”, the fierce contention between them had begun. During the first half of the season in 1990, Arsenal travelled up north to play with Manchester United, a team that was just beginning to find its feet among the top title contenders having won the FA Cup in May 1990.

Although Anders Limpar, the famous two-footed midfielder, scored the goal that gave Arsenal victory, the clash between United’s Brian McClair and Arsenal’s Nigel Winterburn was more prominent on the headlines. The violence that ensued on the field cost Arsenal two points while the Red Devils were set back by one point. But that did not stop the Gunners from winning the league title that season.

Due to Alex Ferguson’s hard work, the Red Devils became the dominant English team in the mid-90s. After the arrival of the Frenchman, Arsene Wenger in 1996, the rivalry between the two teams grew once more.

The Gunners went to Old Trafford again in March 1998 with nine points behind United who were about to win a third successive league title. Arsenal defeated Man. U by a lone goal and went on to win the title.

After three years, in 2001, Old Trafford played host to a match that has one of the most outstanding results in United’s history. The Red Devils trounced the Gunners by 6 -1 in a match that saw Dwight Yorke score a hat-trick. But a year after, in May 2002, Arsenal beat United at home to win the title, which is still celebrated in a unique song by Arsenal fans.

Both sides clashed again a few weeks after the new season began in 2003. The stormy match, which ended goalless, was not without its fair share of violence caused by two events. 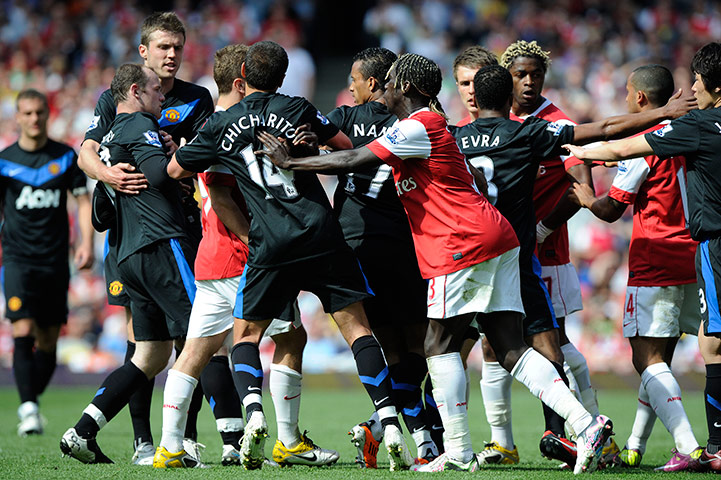 First a red card was given to Patrick Vieira after a tangle with Ruud van Nistelrooy and then a last-minute penalty was awarded to United. Unfortunately Van Nistelrooy missed it and Arsenal players surrounded and attacked him for his failure. The two teams had to pay fines because this event.

When the two teams met again at Old Trafford in the following season, Arsenal had a record-breaking unbeaten run of 49 games. But Ferguson’s side was definitely not interested in becoming the 50th successive victory for the Gunners.

Although United were victorious, the match still end up in fracas due a contentious penalty awarded to United in the 72nd minute and a last minute goal by Wayne Rooney. Reports have it that an unnamed player (who many believe to be Fabregas) threw pizza at Alex Ferguson.

Although many things have happened to change the status of both clubs, the Arsenal v Manchester United fixture is still one of the matches to look forward to in any Premier League season.